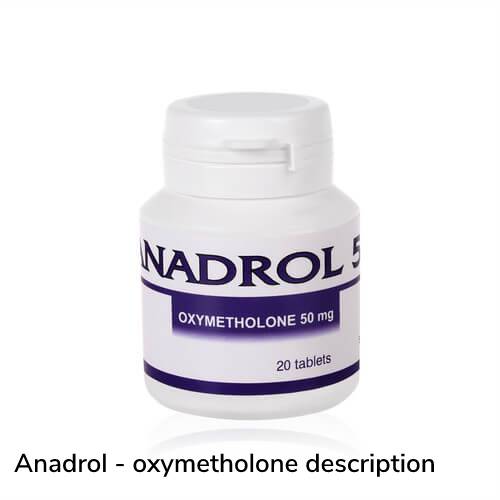 Anadrol is known as one of the most powerful oral anabolic steroids on the market. It is always competing with Dianabol (metandrostenolone), and there is a constant debate in the steroid bodybuilding community as to which drug is stronger.

Description and history of the drug

Anadrol is a brand name and a trademark for the anabolic steroid known as oxymetholone. However, it should not be confused with oxandrolone, also known as Anavar. Oxymetholone is anadrolone. The formula for anadrolone was first developed and introduced in 1959. Syntex began marketing oxymetholone almost immediately under the brand name Anadrol-50. At the same time, Parke Davis & Co. also manufactured the drug, but marketed it as Anadroid. Soon after Anadrol appeared on the pharmaceutical market, it was used to treat a variety of conditions, from senile atrophy to fighting infections. However, Anadrol gained fame and popularity specifically as a drug for the treatment of anaemia. Anadrol was prescribed to patients suffering from anaemia to increase their red blood cell count and haemoglobin levels. With the development of the pharmaceutical industry, less dangerous drugs were used for treatment and the production of Anadrol declined significantly.
Anadrol can rapidly stimulate erythropoiesis (blood formation). Although all anabolic steroids have similar properties, Anadrol shows better blood formation compared to other drugs. Specifically, it should be noted that Anadrol increases red blood cell production by a factor of 5. Anadrol has shown significant anabolic effects in patients diagnosed with muscular dystrophy and AIDS. Patients taking Anadrol lost up to 8 kg, while the placebo group lost weight and had a higher mortality rate. Following the discovery of the drug’s new properties, production was restarted and Anadrol is now used mainly in patients with atrophy caused by the immunodeficiency virus.

Anadrol is derived from the anabolic steroid dihydrotestosterone (DHT). Anadrol is essentially a modified dihydrotestosterone. It belongs to the DHT family of anabolic steroids. All these analogues have in common that they belong to the group of modified forms of DHT. Dihydrotestosterone is considered the “parent” or “precursor” hormone of these anabolic steroids. Anadrol differs from the parent hormone of DHT in that an additional methyl group and a 2-hydroxymethylene group are attached to the carbon atom of the first cycloalkane ring of the steroid structure. Under the action of the enzyme 3-hydroxysteroid dehydrogenase (which is abundant in muscle), dihydrotestosterone is released into muscle tissue, becomes inactive and is reduced to other metabolites. Due to its structure, Anadrol does not interact with the 3-hydroxysteroid dehydrogenase enzyme and remains active in muscle tissue. This gives Anadrol a very high potency, with an anabolic index of 320, which is just over 3 times higher than testosterone with an index of 100. Anadrol has also been found to have lower androgenic potency. Compared to testosterone, which has an androgenic index of 100, Anadrol has an androgenic index of 45.
One unique, yet untested property of Anadrol is that as a dihydrotestosterone derivative it has very high estrogenic activity. Anabolic steroids, which are DHT derivatives, are generally unable to convert to estrogen via the aromatase enzyme and therefore have no estrogenic effect. In this respect, anadrol is clearly different from the others. Anadrol is known to cause water retention, gynecomastia and other side effects typical of estrogen, although it does not convert to estrogen. Anadrol is thought to act in certain tissues in a similar way to oestrogen. This function is described and discussed in detail below. But those who rely on Anadrol should be aware that the drug is a derivative of DHT, but does not have the effects and efficacy characteristic of dihydrotestosterone. Anadrol cannot be converted into estrogens, so aromatase inhibitors cannot cope with the estrogenic effects that are characteristic of the drug.

The drug was launched on the market in the 1960s under its original name Anadrol. It was developed by Syntex Pharmaceuticals and was designed to treat advanced cases of anemia and muscle weakness.
It began to be actively used by athletes to achieve high performance, but its production was stopped in the 1990s. However, the steroid remains popular in medicine. It has been shown to be effective in fighting HIV infection. Today, two versions of this anabolic product are available: Anapolone-50 and Oxymetalone-50.

Action and effects of Anadrol

The product improves the performance of athletes and helps them gain muscle mass and strength in minimal time. If we talk about real data, a person can add up to 7 kg in two weeks thanks to the use of Anadrol. People change before their eyes: they get bigger and their muscles are more visible. However, the drug does not help to gain “quality” weight, so it is not recommended to take it while drying out. In addition, it helps relieve joint pain when the athlete works with heavy weights during intense workouts, and reduces the load on the tendons. This happens because the accumulated fluid serves as lubricant for the joints and muscles and reduces the likelihood of pain and injury after prolonged exercise.
By taking Anadrol from the Balkans, muscles recover up to five times faster after exercise than without it. This means that the athlete spends less time resting and achieves better athletic results.
Anadrol contains a derivative of dihydrotestosterone. The hormone dihydrotestosterone contains a module that leads to aromatization of the human body. The process of aromatization implies an increase in the permissible level of estrogen, which means that the male body begins to be dominated by the female hormone with its accompanying manifestations. When using the synthetic steroid Anadrol, the athlete does not have to worry about such side effects.

Anadrol is an oral anabolic steroid. This means that the substance must pass through the liver before it enters the bloodstream. Anadrol is protected from degradation as a result of metabolic processes by the C17-alpha-alkoxide group, which preserves the integrity and penetration of the drug. Severe hepatotoxicity is a well-known property of Anadrol. The chemical structure and modification of the drug (including the presence of a C17-alpha-alkyl group) make it extremely resistant to hepatic metabolism. Simply put, Anadrol is not broken down upon passage through the liver. The more resistant the substance is to degradation by biochemical processes, the more it stresses the body. This shows the extreme toxicity of Anadrol, which is known as one of the most harmful oral anabolic steroids in history.