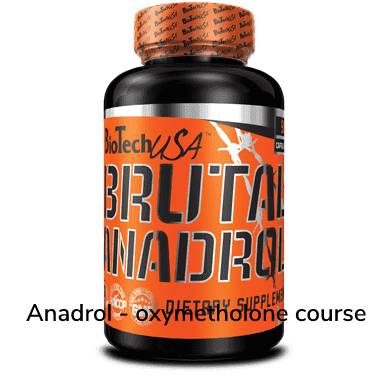 Oxymetholone (also known as Anapolon and Anadrol) is a powerful synthetic anabolic steroid developed by Syntex Pharmaceuticals in the 1960s. Anapolon was originally developed for the treatment of osteoporosis and anaemia (blood deficiency), and to stimulate muscle growth in malnourished and weakened patients. The FDA has approved the use of oxymetholone in humans. Later, non-steroidal drugs were developed that were effective in treating anaemia and osteoporosis, so anapolone lost popularity and Syntex, like many other manufacturers, decided to stop using it in 1993. However, oxymetholone remained in medicine because new studies showed that it was still effective in the treatment of HIV-infected patients.
Anapolon is available in 50 mg tablets and is one of the most potent steroids available, although it can have some side effects common to all anabolic steroids. Oxymetholone oil solution (50 mg/ml) has been available since 2013.

Significant increase in muscle mass (oxymetholone is considered one of the most effective steroids in bodybuilding for increasing muscle mass – up to 15 kg of muscle mass in one cycle, rebound is noticeable after the cycle – up to 30% of the gained mass can be lost as part of the gained mass is due to fluid retention).
Significant increase in firmness
Anapolon relieves joint pain and improves joint function in some athletes (due to fluid retention in the body and increased synovial fluid production). However, not all athletes experience these beneficial properties.

It reduces the binding of sex hormones, making the effects of other anabolic hormones (and the body’s own testosterone) stronger and faster.
It has long been thought that most of the weight gain achieved by oxymetholone is due to water. At the same time, professional bodybuilders began actively using oxymetholone in pre-competition training from about the middle of the last decade. Its use is no longer limited to the day or two immediately before the start of a competition; you can now actively use oxygen almost throughout the entire preparation for a competition without excessive water accumulating under the skin.
Researchers at the University of Southern California decided to investigate what exactly oxymetholone is and what we can expect from it. The subjects were men aged 65 to 80 – this selection was done to highlight the potential benefits of the test drug and to rule out possible side effects (all subjects had lower than normal testosterone levels). It is also important to note that the subjects did not exercise at all (thus ruling out another extraneous factor). Protein intake was 1 g per kg body weight.

Side effects of oxymetholone

The 17-alpha alkyl group in the structure of the drug allows it to pass through the liver without degrading, but this makes anapolone toxic to the liver. A 30-week study was conducted in which subjects received oxymetholone at a dose of 50 mg/day. Various side effects were observed, including hepatic effects.
In the 2003 Schroeder study, subjects were dosed at 50 or 100 mg/day and only one subject had a significant increase in ALT (alanine aminotransferase) during 12 weeks of continuous administration. However, this was later shown to be due to alcohol ingestion immediately before the blood test. In the new analysis, no increase in ALT was found. In all other subjects, ALT and AsAT increased slightly but always remained within normal limits. Therefore, the toxic effects on the liver are greatly exaggerated. The safest dose of the drug is 100 mg per day (or less).
It should also be noted that oxymetholone is not converted to estrogens, but may cause fluid retention, gynaecomastia, hypertension and many other effects. It is believed that anapolone may bind to and activate estrogen receptors. Therefore, oestradiol levels should be monitored during treatment and aromatase inhibitors or blockers of these receptors should be used.
It should be noted that oxymetholone does not have a progestogenic effect and there are no studies clearly showing such an effect. The drug itself is a dihydrotestosterone derivative.

Anapolon is suitable for men over 21 years of age for intensive muscle building.
The duration of oxymetholone treatment is 4-6 weeks. Do not take the drug for longer than 6 weeks, firstly because the greatest results are seen in the first 3 weeks of treatment, and secondly because of the possibility of liver toxicity.

The maximum dose of anapolone that can be tolerated is 100 mg per day. Firstly, because higher doses have not been shown to give better results; secondly, because there is a higher risk of side effects from anapolone. The optimal dose for beginners is 50 mg per day. There are several dosing regimens with daily doses up to 200 mg. Gradual dose increases are only appropriate if there are tolerability concerns. The drug is usually taken in a steady dose from the first to the last day of treatment. Gradual dose reductions are not practical.
A PCT test should be performed at the end of the course. Start taking testosterone boosters for 3-4 weeks to restore testosterone production.
For maximum effectiveness, take a complex sports diet for muscle gain and follow a muscle-building diet.
Always consult a professional before taking oxymetholone.
Combination courses
Oxymetholone combines well with some injectable drugs but should not be combined with 17-alpha-alkylated steroids as this would increase the load on the liver. Anapolon is often used for a so-called ‘quick start’ (anabolic effects start to occur very quickly), providing significant strength and weight gain in the early stages of a course, while the other drugs in the series gently increase concentration. The combination provides a better effect as oxymetholone reduces the concentration of sex hormone-binding globulin while increasing the free fraction of other hormones, acting as a synergist for a very large number of drugs at the same time. Since anapolone has a low affinity for androgen receptors [8] (it binds weakly to them), other highly androgenic hormones can interact with these receptors without competition from anapolone to achieve their full effect.

To increase muscle mass, anapolone is combined with testosterone, boldenone, primobolan or trenbolone.
For strength, it is most commonly used in combination with various testosterone esters. A very effective combination is that of oxymetholone with Stansolol suspension, and athletes notice a rapid increase in strength. However, it should be noted that this combination carries a high risk of injury, especially in people with chronic injuries.
Oxymetholone is almost never used for drying and cleansing as it causes severe fluid retention.
Bodybuilders at competition level often use a single dose of 100-250 mg of oxymetholone per day when going out. This gives fullness to the athlete’s musculature.